Look no further! Plop your buttocks down and enjoy the signature dishes offered in this Chinese operated restaurant. Obviously, this place is non-halal as most Chinese like to incorporate lard into their cooking. *ahem*..Chant with me, "We love pork!"

Located at one of KL's most bustling streets, China Town Seng Kee has got to be one of my favourite 'go to' restaurants for dinner/supper. 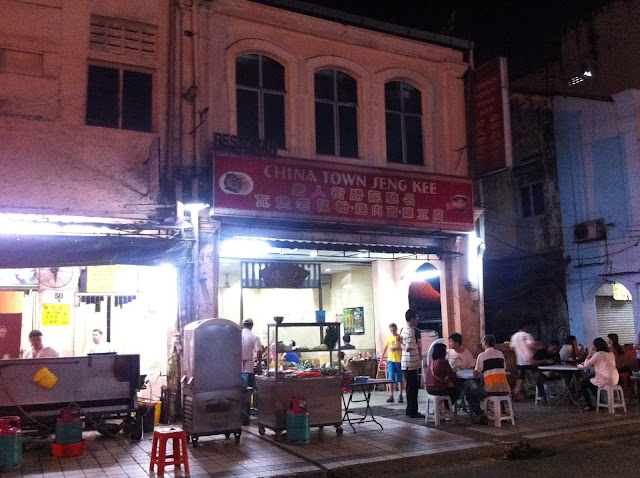 Ha-ha, SURPRISE! Not a very GLAM place to bring your date, huh? Although this place falls short on its sanitary standards, I'll have you know that every dish served made me a very satisfied customer!
I'm sure you have heard of this phrase, 'The dirtier the place, the better it tastes.' ...No? Well, you have now.

*Do bring your own tissue to wipe the cutleries if you are peeved by Seng Kee's lack of hygiene. 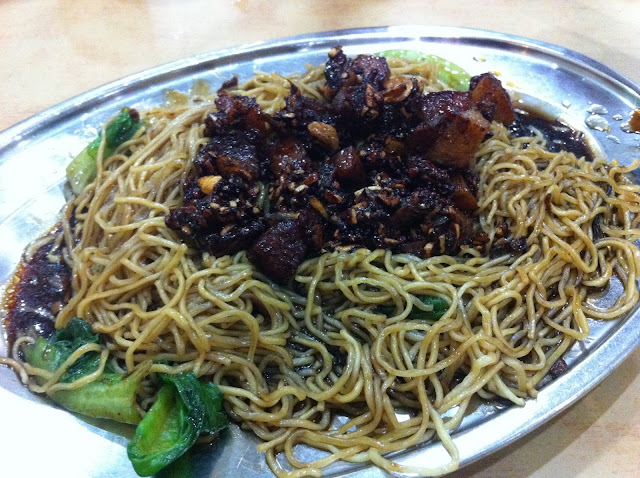 
Crispy roasted pork belly with noodles is one of Seng Kee's signature dishes.
Dude, it was yummy! I do have to tell you in advance that the food served hasn't been very consistent during my past visits, which is probably why it tasted so good when I had it the other night. Topped with  roasted pork belly and fried sugar-coated garlic, the whole dish was ace. The egg noodle was cooked to perfection and the sauce compliments all the elements on the plate. I would have liked it even better if some of the pork belly were a little less chewy. 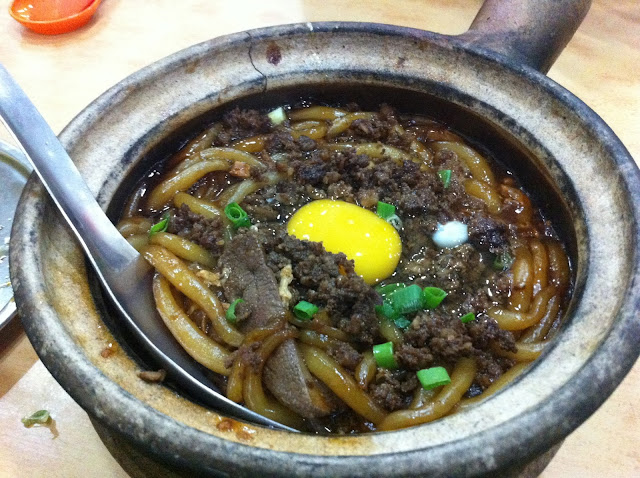 
Since I'm a pearl noodle (loshifan) kind of girl, this is my favourite dish to order whenever I visit!
DIE DIE ALSO MUST ORDER! I frowned a little when my hubby ordered one serving instead of two. I'mma glutton that way.

Throwback story time! About 5 years ago, I used to enjoy Murni's Claypot Loshifan in SS2. Ya'll know where/what Murni is, right? If you're a Malaysian and you don't know what/where that is, kamu 'bagai katak di bawah tempurung'. Anyway, Murni's claypot loshifan's standards began to drop after a year or two. Not only was I disappointed that one of my used-to-be-favourite restaurant's quality has declined, I now have to seek a new loshifan place to nest on.
One fine night, a friend of mine brought me to try Seng Kee's "tikus noodle" and I was hooked since then. The end. That pretty much sums how I came across this restaurant.

For the price of RM9, Seng Kee's claypot loshi is almost double the cost of Murni's version. Instead of minced chicken, the former adds minced pork and liver in the pot, giving the noodles an extra oomph to its taste. I really like it, I do. As I mentioned previously, the dishes lack consistency. Once, the pearl noodles served in the claypot was a tad burnt... bummer.
However, the claypot loshifan served the other night was good. WHICH MADE ME SOOOO HAPPYYYY.

By the way, Seng Kee's Claypot Loshifan is one of their signature dishes too :) 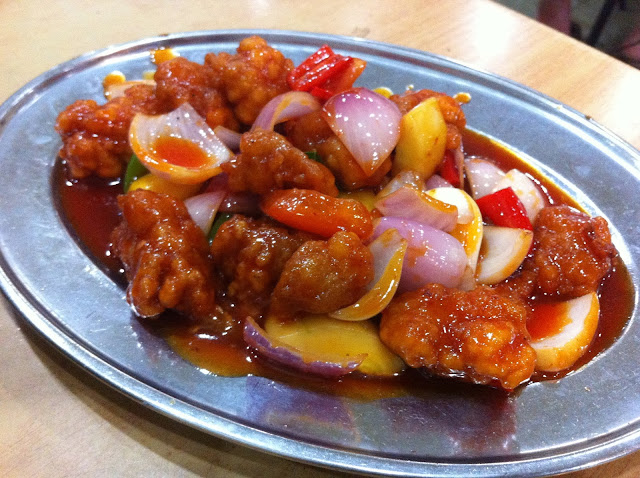 
Pretty pricey for a few cubes of pork meat. Nothing to shout about, just a typical Chinese dish to fill our stomachs. Tasted better ones. 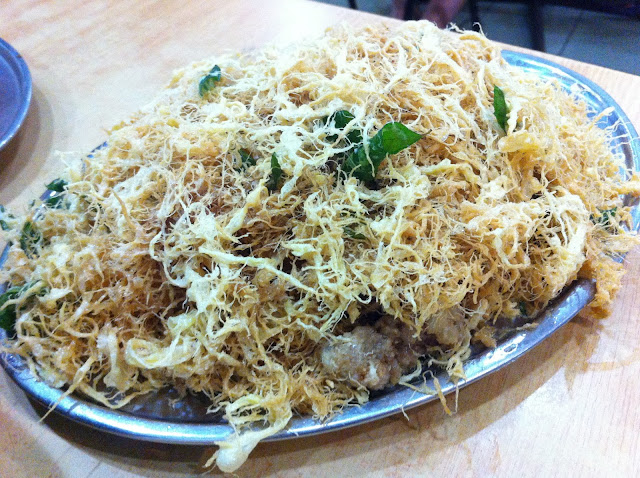 
Lai liu har a.k.a. mantis prawns! The thought of mantis prawns always give me the creeps. Go google it! Just my perception, I think mantis prawns belong to another time frame.. let's say, 10 000 B.C.. Don't you think they look rather fossil-like? THANK GOD they're underwater creatures. *shudders*
We ordered fried mantis prawns in butter milk sauce (dry). Beneath all that flossy-buttery-oily goodness, the prawns are diced into cubes and deep fried. Despite all the negative remarks on how mantis prawns look like when they're alive and crawling, the dish is actually not bad. One can never go wrong with butter milk sauce. It makes a good snack. Still, a little pricey for a small plate of lai liu har.

*******
In Kuala Lumpur, parking is never cheap as someone will MAGICALLY appear, demanding for RM3 or so once you parked your vehicle. Pretty sure they don't have the appropriate license to collect your money as the road side isn't even a proper parking spot. Technically, we're paying them security fees to avoid getting ourselves trapped in unwanted circumstances. (e.g. People scratching our cars/breaking in) *if you know what I mean*

I'm hungry! This restaurant opens till late. Perfect for clubbers or pub-goers to sober up before heading home. Not too sure if the chef works a double shift. If he does, that's a probable explanation for Seng Kee's inconsistency.

This used to be a food blog (if I may declare so myself) where I express my personal views on ..well,.. food.
Hence, the blog link of 'myfoodwonders'.
However, many things have changed since the birth of my baby boy, Jaden.
In short, this blog will now be my little cyberspace where I blog about anything from A-Z, food to mundane routines.. and my precious little gem.